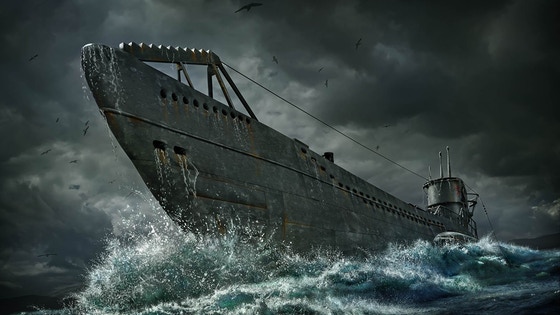 U-BOOT The Board Game

UBOOT The Board Game is a real-time tabletop game of WW2 submarine warfare. An underwater cooperative war thriller that allows 1 to 4 players to assume the roles of the Captain, the First Officer, the Navigator, and the Chief Engineer on board of a type VIIC U-boat. The game is enhanced by a companion app, allowing for an unprecedented level of realism, as well as a challenging enemy A.I. which will push your skills to the limit. The action unfolds both on the strategic and the tactical scale, always demanding teamwork, efficient crew management, and quick situation assessment.

Latest Updates from Our Project:

It's been over a year since the premiere of U-Boot: The Board Game, and Iron Wolf Studio has decided on a new, ambitious project. Currently, they are developing Destroyer: U-Boat Hunter which is a 100% digital PC game. All fans of the innovative board game about the Battle of the Atlantic will find themselves immersed in the theme and once again will be able to experience an amazing underwater adventure.

We also have more plans for U-Boot and we are not leaving it behind. We are currently looking into translating our app into Greek, and we are also discussing the game’s future in order to see how it can evolve and how we can keep making it better.

We are currently also working on Polish translation of rulebook 1.2

In addition, it is worth mentioning another game that tells the story of World War II. However, it is not limited to the cold waters of the Atlantic, but reaches the four corners of the world and encompasses the entire conflict, which can be played in 90 minutes.

The game will allow players to fight on land, in the seas and oceans, and in the air. Not only the iron will to fight will be needed to win, but also team play and clever development of technology.

Moreover! U-Boots are hidden in the stretch goals! Don't miss another history lesson and pure pleasure!

I hope you are well and healthy.

U-Boot could use some of your help again! This time the mission is to win one of the most prestigious awards in the world of board games.

The Charles S. Roberts award is back! Voting lasts until June 15, 2020, and you can vote by using the form on the prize page, by email and traditional mail. In this year's vote, you can vote for war games published in 2019.

The Charles S. Roberts Awards is the longest-running award for board games focused on conflict simulations.

Voting is open until June 15, 2020 at  https://charlieawards.wordpress.com


Please vote for U-Boot in these categories:

Best Board Wargame of the Year

This is going to be a very short update with a very big news: U-Boot has been nominated for the Game of the Year Golden Geek Awards in four categories, as the: Wargame, Innovative Game, Cooperative Game and Thematic Game.

We strongly believe it deserves a win in each. If you agree, please make sure to vote HERE.

You may also want to take part in our U-Boot themed May Quiz, where you can win up to €100. This should be easy peasy for an ubootwaffe fan.

Thank you for your support and stay safe,

A year has passed since the arrival of "U-Boot: The Board Game" to your gaming tables, and many of you have already shared your opinions, experiences, and photos from the games. We're very happy about the rating the game is getting, your kind words and just the fact that you liked the game - what could be a better reward for someone’s work?

Now you have a chance to nominate the game for the Golden Geek Award, which is possibly the largest democratic industry award. We would be extremely grateful if you could nominate for U-boot in the appropriate categories. And then vote for it, once the voting is open. We believe that the designers of "U-Boot" deserve it.

Thank you for your support and stay safe,

We hope that you had a good rest during the holidays, and now you are ready to return to regular patrol duties! With this short update we want to provide you some materials that you have asked for.

We've added a newest version of the app on STEAM, following the previous iOS and Android updates.

Sorry for the delay!

Here are the 1.2 version game books in printer-friendly version:

We have already sent the 1.2 files to our language partners, to let them provide you the newest version of the game rules for download.

And last but not least: PHALANX has just started a new Kickstarter campaign, for a fast-paced deck-building tabletop game of modern space exploration. Please click on the image below and check out Martin Wallace’s Rocketmen!